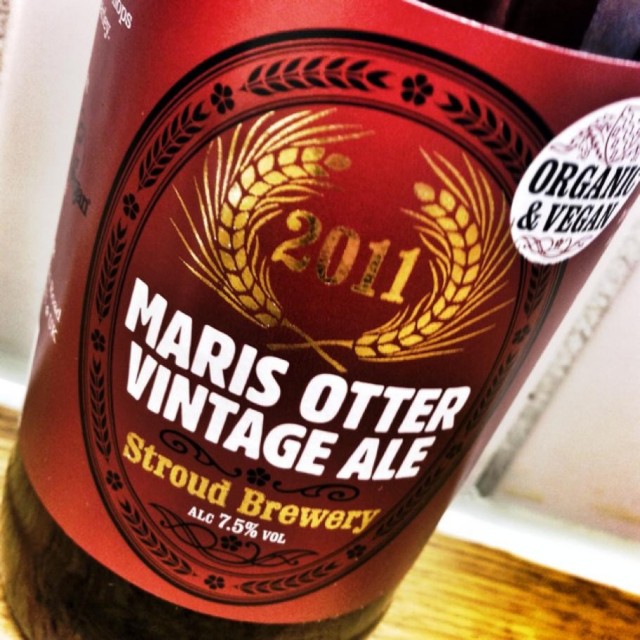 The first reincarnation of Stroud Brewery was founded in 1760 as Watts, Hallewell & Co. It was registered as a company on 1888 and subsequently merged with Cheltenham & Hereford Breweries Ltd. in 1958. It then formed West Country Breweries. The original brewery was then used as a Whitbread depot until 1969 and was demolished in 1970. In May 2006 Stroud Brewery as we know it today opened. Since then it has produced award winning and often organic beer.

Stroud Brewery ha now launches its organic Maris Otter Vintage Ale 2011. It is a bottle conditioned, single malt, single hopped beer that has been brewed using 100% Organic Maris Otter barley malt and English Organic First Gold. This gives the beer a balanced bitterness and spicy, orangey, fruity character.
Maris Otter is a two-row "winter" variety of barley, commonly used in the production of high quality malt for the mainly British brewing industry. Maris Otter barley was bred by Dr G D H Bell and his team of plant breeders at Cambridge. It was introduced in 1966 and quickly became a dominant variety due to its low nitrogen content and superior malting characteristics.
Dr Bell bred Maris Otter in Cambridge 40 years ago with the express purpose of producing a barley variety that would give consistently high quality malt for the cask-conditioned ale market. It soon became the foundation of the finest English cask-conditioned ales.
After many years of being the most widely grown malting barley, crosspollination and use of uncertified seed brought about the decline of the variety. In the nineties much work was done to rejuvenate Maris Otter barley. In 2002, The “Maris Otter rights” was bought outright by H Banham Ltd and Robin Appel Ltd, which have continued to improve the variety. Maris Otter is today, once again, acknowledged across the brewing world as the finest-quality malt available and probably the only variety grown to achieve exactly what brewers require.
In other words this fantastic beer is a tasty piece of history. You should definitely try it!
Nr Systembolaget: 11712
Cost in Sweden: 36 SEK
Written by Kristian Kull

Posted by WesternTaste at 12:09 0 comments